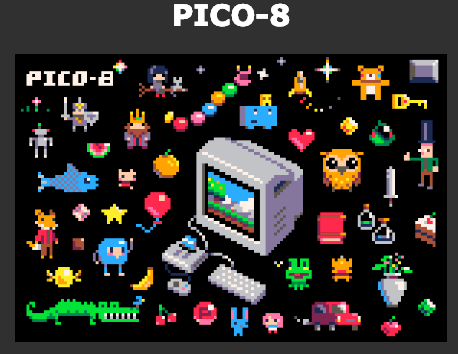 The Pico-8 is a great little engine to start with. Now, let me get this out of the way, it costs money (15$), but there’s something special about it.

The Power Of Small Scale

A lot of us have grandiose dreams of creating huge sprawling worlds with amazing art and graphics. I know I definitely do and we just wouldn’t be developers otherwise right? But, for many of us, we’ve never even made a simple game, we’ve never had to deal with limited scope.

Most game engines are tailored for large teams with big ideas. None of them focus on limitations, which we all SHOULD have when creating our games. It’s a key factor for creating a clear beginning and end point for any project. I’m sure you’ve felt the weight on your shoulders when starting a new project, and you think of all the cool stuff you could make…then BAM back down to earth when you think of all the grunt work you have to do.

Pico-8 limits the scope and gives you the simple assets to work with or create for a small game. This lets you create without being overwhelmed by all the features you want in your game. You’ll feel this weird humbling experience from it; I know I definitely did.

This idea, let’s you focus on core gameplay. A game lives or dies on the core gameplay. If you have heard of Celeste, the prototype for that game was built in Pico-8. Having something users can demo is always amazing and the prototype may just become the framework for the real game. Fun stays fun even in a different engine. That brings me to the basics any game developer would want to know.

The basics of any game can be seen on the Pico-8. You need to have gameplay and a goal. Everything else is icing on top. Do you ever think about the old games you used to play? Yes, the aesthetic is beautiful, it’s great to see the sites, but if the gameplay isn’t there it gets boring right? What keeps you playing? I’d love to hear your thoughts down below. But, all of this really makes you start to appreciate the little tools in Game Design such as timers, which act as an incentive for the player to complete a level within the time limit. These small things take different forms in other games, but the basics remain the same. Fundamentals will always be important in any craft.

Stay tuned for more blog posts this week! Until next time, keep creating. ~